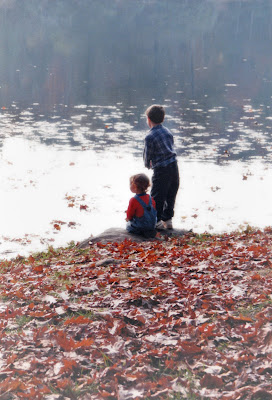 This was taken at Lake Conasauga ~ my favorite camping place in the whole world. We were packing up to leave and the boys were restless, so I sent them down to the lake to toss some rocks in, and just generally play, and use up some energy before the long ride home. I followed them a few moments later...and took this picture (with our old Canon 35mm.)
It was such a sweet setting. Brothers, together at the lake shore, fall leaves all around, reflection off the lake ...just a beautiful moment. After I clicked the picture the usual happened...Ian accidentally knocked his little brother down into the mud. The screams, yells, muddy mess and normal chaos resumed at full speed. But that's alright... the moment was over, but I caught a priceless fraction of it on film forever.