Some thoughts on Grits! 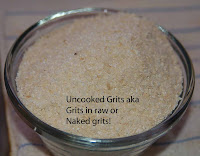 Grits were the subject of conversation this morning amongst my Lallyquilter friends. Some of my foreign friends just don't understand grits at all. 'What are grits?' they asked...so here's a post all about Grits!

Grits are coarsely ground corn. Grits in the raw is gritty. Don't eat grits in the raw. It has to be cooked in boiling water, with lots of stirring to prevent lumps. Lumpy grits are not good. I think of grits as a side dish, not a cereal like oatmeal or cream of wheat. I've heard of some yankees who put sugar on grits. Thats okay on oatmeal & cream of wheat, but IMO, not grits. Sweet grits? Nope, that just ain't right.

When you go out to eat breakfast in the south most of the time you don't order grits, they just come.
Grits cooked, topped with butter & lightly salted are an awesome, filling breakfast side dish. Along with some bacon & eggs - you will be all set for the day. When I was pregnant with Cole I ate a lot of grits. It was the ONLY food I didn't 'toss my cookies' on. Funny tho' - Cole doesn't like grits.
Some folks like the make them fancier - cheese grits, or even shrimp & other stuff to make it more of a snazzy 'souffle' type dish. My family in Florida like to have Fish Fries - gatherings where they serve fish - usually mullet, and grits as a side dish. Folks in GA think I'm crazy with I talk about these fish fries. They don't do fish & grits. So each Southern region has it's own way of doing grits. That's cool. "Cool as Grits" is something an old friend use to say. I always thought that was funny because grits aren't good cool. They gotta be hot! *G*

Enjoy your grits folks.... on this cold January morning I did!

Thanks for that explanation Donna! I've often wondered what exactly grits are. :o)

Hahhaha! Good job there Donna. Now when anyone ask me about grits I'm gonna send them here.

I've got you on my Google reader so I can see when you update. Great thing!

Hugs and keep on blogging!

Oh, I forgot to tell you. I have those same dishes but without the heart in the center. Aren't they the best bowls around!

Good job on the blog, girl! And thanks for the explanation about grits. I've always wanted a good southern cook to fix them for me.

Tell you what, you make me some grits, I'll make you some halushki. :-)